In our weatherization work we blow a lot of cellulose insulation into attics, a whole lot. I love cellulose insulation. It is relatively inexpensive. It is made from 85% post consumer recycled materials (essentially shredded newspapers and pulp fiction). It has compelling r-values and it is completely inflammable (the 15% non-recycled content is a borate mix serves as a fire retardant and moldicide).

But sometimes it is just in the way. We recently started a major interior renovation of an early 20th Century house in the town of Great Barrington. As part of this renovation, we are creating a studio space in what had been an attic space. The previous owners had had cellulose packed into the floor between the second story and the attic. This made some sense when the attic was just an attic. But we are going to be insulating the roof slopes above the attic, so the insulation in the floor would be insulating between two heated floors. Our initial plan was to just leave it in place, but we quickly discovered the cellulose was going to be very much in our way. 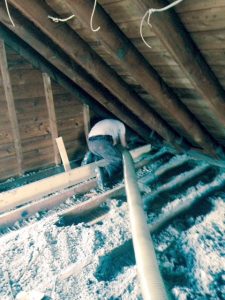 The floor joists in the attic were never designed to carry much of a live load. This would mean that we would have to sister on thicker floor joists to handle the larger loads required by a habitable studio. We started by trying to work around the cellulose, simply moving it aside to lay in our new joists. It turned out to be a nightmare to work this way, so we began to consider ways of getting the cellulose out.

In the end, we purchased a brute of a vacuum for the job. A 14 hp gasoline engine drives an enormous impeller that generates enough sucking power to rip your face off. The manufactures claim that it can remove over 6000 pounds of cellulose per hour. It made quick work of cleaning out the attic, which is now ready to be reframed and floored. Unfortunately there is no easy and economical way to reuse the cellulose we sucked out. This is because we did not just suck out cellulose, but chunks of plaster, wood and nails large and small, as well. These would destroy the guts of our expensive installation equipment. So the material will have to go to a landfill. But if you have to put a building material in a landfill, cellulose is about as low-impact as a material can be.