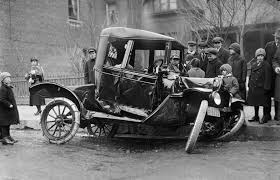 07 Apr Commitment Devices, 400 PPM and the Death of Fordism

Posted at 10:10h in What We Believe by Joe
Share

In the movie, The Company Men, we see what happens to people when corporations are awarded personhood, both legally and emotionally, and shareholders, driven by an obsession with daily increases in stock prices and a rabid fear of price falls, are given the reins of control.  We see a well established company, GTX, maneuvered about by forces desperate to keep up appearances for today while gutting the web of interpersonal relationships, developed over many years, that built the company and would be the key to its survival tomorrow.

Admittedly, the movie is a little over-the-top, but if one can look past the usual Hollywood hype, one can see in it the slow but persistent erosion of what the Oxford economic historian Avin Offer calls “commitment devices.” In Offer’s view, any society needs commitment devices to act as a countervailing force to what economists call “hyperbolic discounting”: the tendency of the individual ego to overvalue immediate needs and wants while undervaluing those of the future. Commitment devices make possible, indeed encourage, the principle of delayed gratification, which is at the very foundation of the notion of enlightened self-interest. But all of that is missing in The Company Men, and so the Craig T. Nelson character has no choice but to sack Tommy Lee Jones, his college roommate and friend and confidant of 40 years, in order to throw a bone to stockholders, to offer them some concrete evidence that costs are being cut, that something is being done to rescue their falling investments.

Happily, the Tommy Lee Jones character is able to live off his previously accumulated wealth; he eventually strikes out on his own, GTX and his college roommate be damned, and becomes a presumably successful consultant. But Offer and others are not so sanguine about the prospects of individuals when commitment devices get gutted. Without the fundamental commitment devices of trust, hope and genuine fellow-feeling, life cannot but fall into a kind of Hobbesian dystopia of nastiness, brutishness and brevity.

For the first time in history, anthropo-genic CO2 levels have arisen above the 400 ppm. This is a significant threshold. There is a general consensus among climate scientists that a 350 ppm limit is what is needed to stop climate change. We are roughly 15% higher than that now with few signs that the cultural, political and economic conditions are in place to enact meaningful change. We have now entered what Churchill called the “period of consequences”, and frankly, things look bleak. It is difficult not to get discouraged. This is precisely the moment when we have got to rely on those fundamental commitment devices of trust, hope and fellow-feeling. We must be able to stand on those devices, lean on those devices, so that we can grope our way through our discouragement and despair and uncover the workable solutions that we must trust are there.

And workable solutions are being developed. In his book, Prosperity Without Growth, the economist Tim Jackson outlines three categories of action those serious about solutions to the problem of sustainability ought to be engaged in:

– Establish Limits: we need to get a handle on what are the realistic limits of our finite planet. Much progress has been made in this arena in the last 20 years, but more needs doing.

– Develop Alternative Economic Models: Economic stability is a fundamental human need. But we have got to develop models of economic interaction that maintain stability as the end goal without relying on unfettered growth as the driver.  Some creative work has taken place here. But much more needs doing.

– Change the Social Logic: Fordism, that quintessential logic of American modernism (which has morphed into globalism), the idea that our identities and our sense of happiness are so narrowly tied to the efficiency with which we produce and the voracity with which we consume, has got to be stopped, abandoned, replaced. The popular imagination is in desperate need of finding something new to hang its highest aspirations on. Some have always thought this way. More are beginning to. Much, much more needs doing here.